This article is the first in a two-part series contributed by Odell Ward, North Plains GCD Program Coordinator.

When people think of playa lakes, they may picture a landscape dotted with small lakes covered with ducks, geese and other types of water birds. In reality, that view of a playa lake is a rare treat. Playas are ephemeral and only contain standing water about 10% of the time. When wetted by precipitation events, playas seldom hold water for more than a few days or weeks. It is more common for playa lakes to remain under dry conditions than to have standing water. Large playas can stay dry for decades without receiving enough runoff to seal up the bottoms allowing water to pond. Large playas can retain standing water for months and in some cases, longer than a year. Small playas can often fill with runoff each spring and quickly dry up within a few days.

Playa lakes cover less than two percent of the total land area of the region with 87% of the playas having less than 30 acres of surface area. Playas average three feet in depth and have a holding capacity of approximately 45 acre-feet of water. To accumulate water, playas need short, heavy, intense precipitation events that produce two to three inches of rainfall over a few hours or even a few days. During the summer months, 50-60% of all available water in the playa is lost to evaporation. The remaining 40-50% infiltrates into the soil through cracks in the clay soils before the cracks seal up. Of the water that infiltrates into the soil during the first few hours of a ponding event, only an estimated 20% reaches the water table to recharge the aquifer. Studies show that infiltration under the playas occurs ten to twenty times faster than the areas between playas. Water percolation downward towards the water table moves at a rate of between one millimeter and 500 millimeters per year. Ponding events in the fall usually last longer than events occurring in the spring. 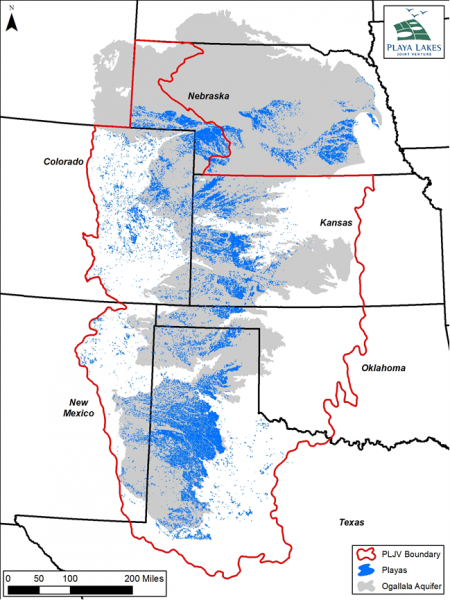 Regionally there are about 66,000 recognized playas in the central and southern High Plains that make up Eastern New Mexico, the Texas Panhandle, West Texas, the Oklahoma Panhandle, Southwestern Kansas, and Southeastern Colorado. Considering the Canadian River as a dividing line between the Central Plains and the Southern Plains, playa lake concentrations are much higher to the south. North of the Canadian River the density of playas per square mile can be as low as one in every ten to fifteen square miles. South of the river, densities can reach one playa for every two square miles.

The lakes to the north of the Canadian River tend to be larger and hold water for more extended periods than the playas to the south. Many studies suggest that the reason for the larger size is due mostly to climatic differences. Average seasonal temperatures increase north to south, significantly influencing the duration of water ponding in the playas. Although the High Plains is a semi-arid to arid region, precipitation varies from north to south as well as from west to east. Average annual rainfall amounts can reach over 22 inches a year in northeast Nebraska and as little as 14 inches in west Texas. Evaporation rates in southern west Texas are also much higher than in the northeastern Plains states.

Playa lakes are not only crucial for recharging the aquifer, but they help maintain the quality of the water reaching the aquifer as well. The water running off into playas tends to have high levels of total dissolved solids, chlorides, sulfates, nitrates, and pesticide residues. The clay soils of the playa bottoms filter out these contaminants and hold them in the soil until they can be weathered and broken down into less harmful forms that can be utilized by plants that inhabit the playas.