The four-member committee in charge of planning for the Panhandle’s future groundwater needs approved goals that will affect water policy in the area for the next 50 years. The Groundwater Management Area 1 (GMA 1) Joint Planning Committee (JPC), comprised of a representative from the four groundwater conservation districts within GMA 1 and one at-large member, approved a resolution at their November 2nd meeting that establishes Desired Future Conditions (DFCs) for the 18 counties in GMA 1. A DFC is a goal for the volume of water to be left in the aquifer at a specific point in the future. The approval is the culmination of a three-year process that included joint planning between the districts, public meetings across the districts, and public comment periods for citizens to have input into the process. 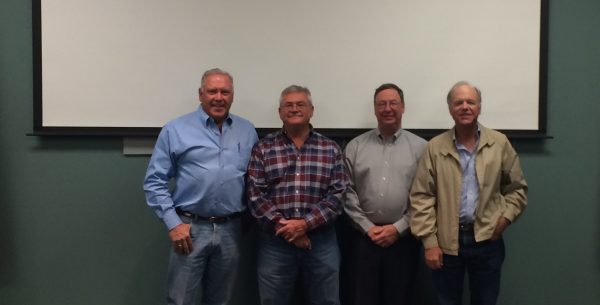 A resolution of adoption of the DFCs, along with the explanatory report detailing the consideration process, will be sent to the Texas Water Development Board (TWDB) for review. TWDB staff will check to insure that legal and administrative procedures were followed throughout the creation of the DFCs. Once approved by the TWDB, and barring any protest by an affected party, the DFCs will take effect.

According the Texas Water Code, the JPC was charged to adopt DFCs that will “…provide a balance between the highest practicable level of groundwater production and the conservation, preservation, protection, recharging, and prevention of waste of groundwater in the management area.”

The DFCs approved by the JPC are as follows:

The JPC adopted the following DFCs for the Dockum Aquifer in the GMA 1 Joint Planning Area:

The JPC designated the Blaine Aquifer in Wheeler County as non-relevant for the purposes of joint planning.

In the process of establishing DFCs, the JPC was required to consider the following factors listed in Texas Water Code Section 36.108(d)(1 – 9):

All supporting documents for the DFC planning and adoption process are available to the public at www.panhandlewater.org.

For more information contact Kirk Welch at kwelch@northplainsgcd.org or 806-922-7947.