District Conservationist and Demonstration Project Lead Leon New received the 2017 Blue Legacy Award for Agriculture (Non-Producer) during Texas Water Day at the capital in Austin on March 22. From 2010-2014, New was the project lead on the district’s “200-12 Reduced Irrigation on Corn Demonstration” (200-12 Project). The district agriculture committee won the Blue Legacy award in 2011 for the “200-12 Project.” The next year, the “200-12 Project,” under New’s direction, won the Texas Environmental Excellence Award, the state’s highest conservation award. While earning awards, the “200-12 Project” also averaged a savings of more than five inches per acre when compared to traditional irrigation protocols. A five acre-inch savings over the district’s 1-million irrigated acres would result in a savings of over 400,000 acre-feet annually.

When the “200-12 Project” concluded in 2014, New built upon its success and devised and managed the district’s follow-up demonstration, the “3-4-5 Gallon Production Maximization (GPM) Project.” The “3-4-5 GPM Project” will conclude with the 2017 season, marking eight consecutive years that New has led the district’s agricultural demonstration projects, showing irrigators how to get more from every drop of irrigation.

Eight years of leading award-winning programs with the district is a noteworthy accomplishment, but New’s outstanding work started long before that. “New has spent his career working directly with hundreds of growers throughout the state and the nation to improve their irrigation efficiency and improve their on-farm management practices,” said North Plains GCD General Manager, Steve Walthour.

As an extension specialist with Texas A&M AgriLife for 40 years, New worked with irrigators in one-on-one consultation and as part of demonstration and research initiatives. “His assistance inevitably became lessons that would make us all better farmers and water stewards,” said Danny Krienke, NPGCD board Vice President and Ochiltree County irrigator.

New’s contributions include pumping plant efficiency testing and analysis, use of flow meters as a management tool for producers, and research that led to the development of Low Energy Precision Application (LEPA) technology to dramatically increase the application efficiency of center pivot irrigation. These practices and technologies are widely used by Panhandle-High Plains irrigators today.

New makes complex concepts understandable to producers, while maintaining the respect of his peers in the technical community. “He (New) was my go to person when I had a question about irrigation pumping plant performance, testing, or troubleshooting. I left Amarillo in 1993 to serve my agency as the NRCS State Irrigation Engineer for Texas but still called Leon from time-to-time with questions,” said Jerry Walker, USDA-NRCS agricultural engineer.

“Dr. Leon New shaped the way producers in our area water their crops today,” said C.E. Williams, general manager of Panhandle Groundwater Conservation District. “With almost 50 years of service in water conservation, his dedication and expertise are second to none.” The NPGCD board of directors and staff congratulate Leon New on this much-deserved recognition of his outstanding career and his dedication to stewardship of the region’s groundwater. 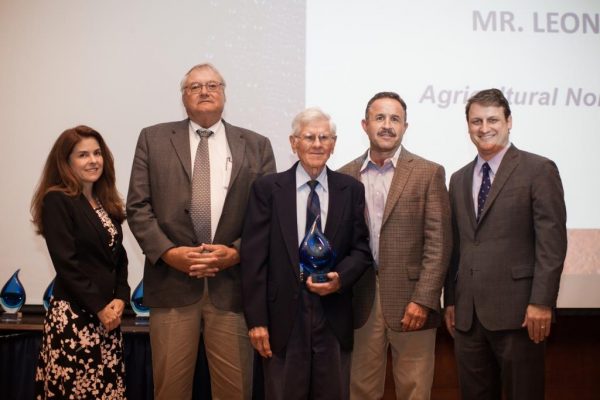