Christy Hernandez Zamarrippa from Mr. Smyth’s class in Hartley, Texas is the grand prize winner in the 2018 Water Conservation Artwork Contest sponsored by the North Plains Groundwater Conservation District (NPGCD).  The annual contest is open to all fourth, fifth, and sixth grade students who reside within the district.

Christy’s artwork titled “Save Water” shows two hands in the shape of a heart a rainbow background with water dripping onto the earth below. Christy received her original artwork in a frame, a $50 cash prize, and her artwork is featured on the cover of the 2018 NPGCD Water Conservation Calendar. Christy was in Mr. Smyth’s class from Hartley School in 2017 when the entries were submitted. The calendars are free to the public.

Other winners in this year’s contest are:

Caitlin Admire – artwork titled “Ways You Can Conserver Water”. Caitlin was in Ms. McOmber’s class at Hillcrest Elementary in Dumas.

Gisselle Lopez – artwork titled “Don’t Waste it! Save it!”.  Ashley was in Mrs. Resnick’s class at Sunset Elementary in Dumas.

These students received their artwork framed, a $25 cash award, and their artwork is featured inside the 2018 Water Conservation Calendar. Additionally, each student received copies of the calendars to share with friends and family.

The water conservation calendars serve as colorful reminders of how we can be better stewards of our water throughout the year. The calendars are available to the public at no cost at the North Plains Groundwater Conservation District office at 603 East 1st Street in Dumas, and at water utility offices in each town within the district. You can also request copies of the calendar by calling the district office at 806-935-6401.

The district would like to thank all the students who participated in this year’s contest. We also appreciate the parents and teachers who encourage their students to enter this contest each year.  It is an excellent way to challenge students to think about ways they can conserve water, while allowing them to communicate a water conservation message to others through their art. 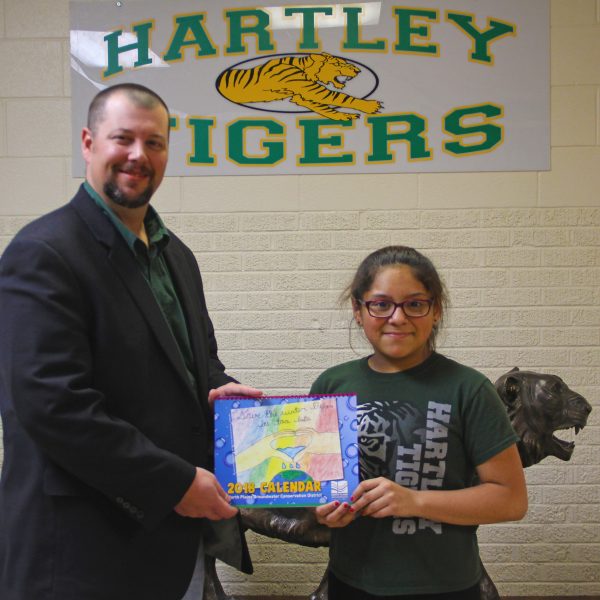 Principal Kurt Koepke presents Christy Hernandez Zamarrippa with the 2018 NPGCD Water Conservation Calendar with her artwork showcased on the cover.