The Stallwitz family of Moore County, TX was honored with the 2016 Farmer Rancher of the Year Award as part of the Amarillo Ag Appreciation Luncheon during the Amarillo Farm and Ranch Show.

The Stallwitz name was brought to Dumas in 1910, when John Stallwitz came through on a train and saw potential for farming in Dumas. He purchased a section of land, planted some seed, and hoped for a bright future in the farming industry. In 1933, his son Ed moved to Dumas to help with the farm. That same year, Ed had a son, Eddie Stallwitz. Later Eddie Stallwitz brought his two sons into the operation and now Darren Stallwitz continues the family farm business with his son, Garrett. 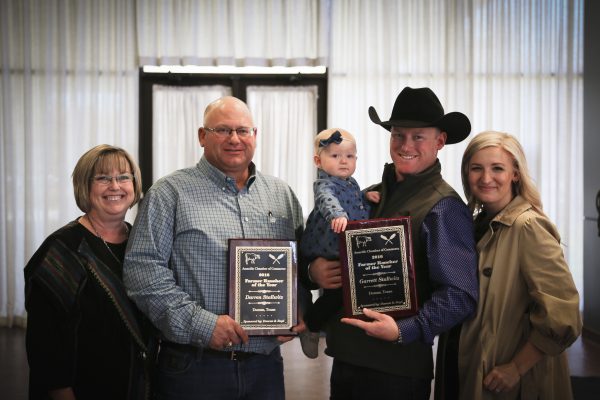 In 1983, Darren graduated with an “Ag Economics” major from Texas A&M University. Throughout his years in Moore County, Darren has served his community in many ways.

He has been on the Farm Bureau board for 25 years and is currently serving as the State Wheat Commodity Chairman for Texas Farm Bureau. He is also on the Dumas Co-op board, NRCS board, and on the Dumas Cemetery board. He serves as a deacon at the First Street Church in Dumas, the “Pit Boss” for Lions Club, is an honorary FFA member, and a member of the Moore County A&M Club. Previous community roles include the founding board for the Dumas Education Foundation and the Sun Bank Advisory board. Darren has also completed the “Master Marketing” program and is currently taking the “Strategic Application of Grazing Ecology for Better Rangeland Utilization and Superior Habitats”.

Darren is a loving husband of 31 years to Dana Stallwitz, a father to Garrett and daughter-in-law Madison, and daughter Crysta and son-in-law, Craig Riseling. He is an extremely proud “Grumpy” to his granddaughter, Poppy. He enjoys spending time with his family, working cattle with his son, Aggie football, and trips to the mountains.

In 2009, Garrett graduated from West Texas A&M with a major in “Animal Science”.

He currently serves as the secretary on the Moore County Farm Bureau board, is a Lions Club member, FFA member, and is the assistant superintendent of steers for the Moore County Stock Show. He has also completed the “Master Marketing” program as well as the “Strategic Application of Grazing Ecology for better Rangeland Utilization and Superior Habitats”. In the last few years, Garrett has built his herd to 100 head of cattle.

He is a loving husband to Madison Stallwitz, and father to his 11 month old daughter, Poppy. He enjoys spending time with his family, working cattle, buying cattle, and skiing.

Duncan & Boyd Jewelers has proudly supported the Farmer Rancher of the year for the last 25 years. Recognizing farmers and ranchers are the backbone of the Panhandle and the hard work these community members do year round, Duncan & Boyd is proud to honor the Stallwitz family.