In 2014, North Plains Groundwater Conservation District (district) refocused and renamed the North Plains Research Field at Etter, TX as the North Plains Water Conservation Center (WCC). In partnership with Crop Production Services (CPS) and local farmer Stan Spain, the WCC is in its third year of demonstrating graduated irrigation regimens of 3, 4, and 5 gallons per minute (GPM) pumping capacity to simulate the conditions faced by most producers in the district.

The following is a timeline for what has taken place recently at the WCC in 2017.

The district and CPS kicked-off the second year of the Master Irrigator Program on March 22, 2017 by sharing planting plans for the WCC with participants. At the end of May, CPS planted a circle and 20 acres of drip irrigation containing the dicamba cotton trials. This cotton has been genetically engineered to resist dicamba, an herbicide designed to reduce weeds.

On June 22, 2017, the National Corn Growers Association Board came to the WCC while in the Texas panhandle, where they learned about the district’s demonstration projects and how the district is exploring various ways growers can get more crop for every drop of precious groundwater. 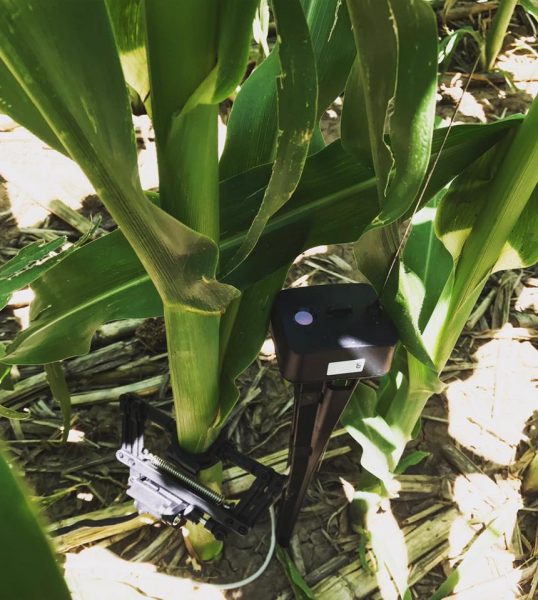 One of the tensiometers that Phytech installed at the WCC.

After applying 2” of water for the assistance of corn germination at the end of May, irrigation stopped for about a month. It wasn’t until June 28th that irrigation at the WCC began again. On June 30th, the dry land wheat was harvested.

Phytech, an ag service company that develops plant-based practice applications, installed three tensiometers at each of the six demonstration plots at the WCC on July 6. Tensiometers measure the plant’s stress by whether the plant swells or shrinks to determine whether more or less water should be applied.

Follow us on social media and look for the Fall edition of the district newsletter for updates on the continuing activities at the WCC. To read more on the “3-4-5 GPM” project, go to http://northplainsgcd.org/conservationprograms/agricultural-conservation/3-4-5-demonstration-project/, or contact Kirk Welch at (806) 935-6401 or email kwelch@northplainsgcd.org.